Dust mites are microscopic creatures and it doesn’t take much to send them spreading into the air. There are suggestions that an air purifier will be handy in killing dust mites. Are they true or mere marketing hypes?

Instead of rushing to purchase a multi-featured air purifier, you’ll want to read this entire article. You’ll get a better idea of the role an air purifier plays in dust mites prevention and if it’s of any help at all.

How Does An Air Purifier Work? 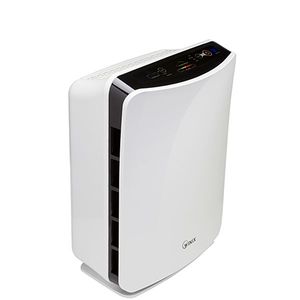 The air purifier has always been advertised for having the ability to ‘clean’ the air in your home. But how exactly does it do so?

An air purifier typically consists of a fan and a series of filters that are housed within an enclosure. The fan will draw air from the environment, pass the filter, and releases it back into the room. Any contaminants, microparticles, and odors are neutralized by the filters.

Usually, an air purifier is equipped with an activated carbon filter and the HEPA filter, which deodorized and traps allergens within the unit. Some air purifiers also include a UV filter, which is supposed to provide a germicidal effect.

How Small Are Dust Mites And Are They Airborne?

For a start, you need to be aware that dust mites are very small and they aren’t visible to the eyes. To be exact, each adult mite is about 0.3 mm or 0.01”. The mites are bare of any weight and they can easily send flying into the air.

These mites, however, don’t linger in the air for too long. According to the American Lung Association, dust mites allergen remains in the air for only minutes, before falling off to surfaces due to their relatively heavier weight.

When the term allergen is used, it can be assumed that it also means the fecal pellets of the mites, which contain a type of protein that triggers an allergic response in humans.

If you’re making your bed, cleaning your home, or running around on a mites-filled carpet, there’s a high chance of having the mites floating in the air and inhaling the allergens. That explains why you start having sore eyes or sneezes after such activities.

Theoretically, installing an air purifier will remove mites that are floating in the air. Of course, this is assuming that a HEPA filter air purifier is used. The HEPA filter, which is rated to blocks up to 99.97% of particles as small as 0.3 microns, will have no problem in trapping the mites.

A detailed study was conducted by the Guangzhou Institute of Respiratory Health, which tries to relate the efficiency of air purifiers in allergic rhinitis therapy. It involves setting up air purifiers at the head of the beds and turning them on for around 9.6 hours daily.

The result of the study shows that the concentration of dust mites in the air, and beddings decline when an air purifier is used. Participants also reported that allergic symptoms attributed to dust mites also decreased slightly.

So, does an air purifier kill dust mites?

The said study only examines the number of mites in a room and does not inspect the mortality rate of mites trapped in the air purifier. Chances are, the mites aren’t going to survive for long as they are cut off from their food source.

Is A UV Air Purifier More Lethal For Dust Mites?

Chances are, you may have heard of air purifiers that are fitted with UV bulbs. UV rays, particularly UV-C, are used for killing germs, bacterias, and viruses. Exposure to UV rays for a prolonged period will kill dust mites too.

In a UV air purifier, the dust mites are trapped by the filter and exposed to the UV ray for as long as it’s turned on. This will eventually lead the pest’s demise quicker than waiting for their natural demise.

In my attempt to reduce dust mites in my home, the air purifier is the first appliance that I’ve bought. Of course, you can’t rely on a single tool to cut down dust mites’ growth. I’m confident that getting an air purifier helps as long as you’re taking care of other aspects of eliminating dust mites.