Can Dust Mites Cause Sinusitis?

Can Dust Mites Cause Sinusitis?

If you’ve been struggling with sinusitis, you’ll know that the symptoms can be tough to deal with. Various causes are associated with sinusitis, including dust mites. But are dust mites a contributing factor to sinusitis? What does the science say? And most importantly, how do you deal with dust mites?

As someone with bad sinus issues and been battling for dust mites for at least 2 years, I’m sharing what I’ve come across on this issue.

Sinusitis is the official term for sinus inflammation. Sinus refers to the air-filled gap within the structure of your skull or face. Unlike what most people assumed, the skull isn’t a completely solid structure. Instead, there are hollow cavities, or gaps, between the bone structure that makes up your skull.

These cavities are covered with a thin layer of pink tissue called the mucosa. On a healthy person, the sinuses are pretty empty except for a tiny amount of mucous. The gaps in the sinuses mostly end up in the nasal pathway.

In some situations, the sinuses are inflamed, in a condition called sinusitis. There are a few types of sinusitis, with chronic and acute sinusitis commonly diagnosed among patients. Acute sinusitis usually lasts around 4 weeks and may manifest itself with mucus discharge, headaches or discomfort on the facial structure.

Chronic sinusitis is where the inflammation seems to persist and may continue to affect a person even after initial symptoms subside. Due to the repeating symptoms, which can be more aggressive, some patients may need invasive treatment or surgery to address chronic sinusitis.

What Are Dust Mites? 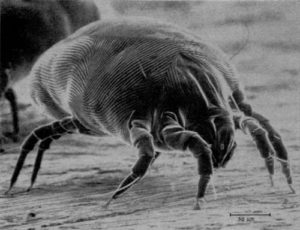 Dust mites are microscopic organisms that are from the arachnid family. These creatures are invisible to bare eyes and are found in almost most households around the world. Dust mites thrive in temperature between 20°C – 25°C (68°F – 77°F) and humidity of 70%-80%.

As for their nutritional requirements, dust mites feed on dead skin cells that are shed by humans. Most homes comply with these criteria and are likely to be infested with dust mites. Most of the mites are found in high concentrations in mattresses, where individuals spend most of their time sleeping.

Other favorite haunts of dust mites include carpet, sofa, and upholstery.

Can Dust Mites Cause Sinusitis

By themselves, dust mites are pretty harmless. They don’t bite humans nor do they cause any harm for living beings. However, dust mites produce a type of protein, that is found in their fecal pellets or carcasses that will trigger allergic reactions in humans. The protein, or dust mite allergen, is the culprit of the various allergic symptoms suffered by people who are sensitive to the exposure.

Sinusitis is usually attributed to virus infection, with about 90% of cases attributed to it. Occasionally, nasal inflammation can also be triggered by bacteria, pollutants, fungi, and dust mites.

According to Dr. Garret Bennet, a rhinoplasty and sinus surgeon, dust mites can trigger allergic reactions along the membrane on the sinus cavity. This eventually causes acute or chronic sinusitis. He also suggested that dust mites allergic has the worst reaction when people are asleep, due to their cilia, a type of cells, is at resting state.

Usually, an individual who suffered from sinusitis is diagnosed by doctors based on the symptoms. The symptoms usually include nasal congestion, facial pain, cough and the decrease in smelling sensitivity.

In severe cases, patients are referred to as ear and nose specialists, where nasal endoscopy or CT scan may be carried out.

Your doctor will prescribe treatment based on the severity of your condition. For mild sinusitis, the symptoms will usually go away with over-the-counter medicine and rest. However, doctor may prescribe drugs like antibiotics, antihistamines, and corticosteroid nasal spray to fight the infection and relieve the symptoms.

I strongly suggest that you consult your doctor if you’re suffering from sinusitis. Avoid self-prescription as you may not be aware of the side effects of the medicines.

While medications may be a quick way out for sinusitis, you’ll also want to apply some home remedies to be less dependent on the drugs. If you’re experiencing facial pain, placing a warm and wet blanket over your face may ease the pressure within.

Nasal congestion can be aggravated when your room is too try. If that’s the case, you can breathe in from a bucket of hot water and install a humidifier to moisturize the surrounding air. If boiling a bucket load of hot water is troublesome, you could get a personal portable steam inhaler.

There are some tools that can be handy in relieving the symptoms. Get hold of a Neti pot, which is a nasal irrigation device that flushes out the nasal cavity with distilled water and salt mixture. Some people use Neti pot on a weekly basis while others flush their nasal cavities daily to prevent blockage.

It’s also recommended to drink plenty of plain water or juices to remain hydrated. Get as much rest as possible and avoid being exposed to the allergens.

Getting Rid Of Dust Mites

You’ll need a two-pronged strategy for sinusitis. While treating the symptoms for relief is important, you’ll want to address the cause of sinusitis. If dust mites are the culprit, it’s crucial to get rid of these tiny pests from your home.

Often, dust mites are concentrated on your mattress. To avoid sleeping with millions of these creatures, you’ll need to make a habit of washing the beddings regularly. Using a UV vacuum cleaner also helps to eradicate dust mites that are breeding in the mattress.

Check out more tips for getting rid of dust mites in the mattress here.

Carpets are also a common hiding spot for dust mites, which you’ll want to pay attention to. The best way of getting rid of these microscopic pests that are hiding deep in the carpet is to use a steam cleaner. The hot vapor permeating the thick fabric will kill off the mites instantly.

Here are more tips for ridding dust mites from your home naturally.

Every person may have different severity in sinusitis. If symptoms persist or get worse, consult your doctor immediately. Meanwhile, I hope this article helps in dealing with dust mites if they prove to be a cause for your sinus infection.