Merely making your bed in the morning could send possibly tens of thousands of dust mites and their fecal pellets into the air. These allergens can trigger a series of symptoms, which can turn your life miserable.

Can ionizers, a technology often mentioned along with air purifiers and air conditioners, kill the dust mites that are floating in the air?

Before you start installing a powerful air ionizer, you’ll want to read this article. There are different opinions in the efficacy of ionizers for allergies but what’s more important is you need to understand the potential side effects of using an ionizer.

What Is An Ionizer And How Does It Work?

The term ionizer, air ionizer, and negative ion generator are often used interchangeably. They point to a technology that uses high voltage to create negative ions and releases them into the air. These negative ion combines with the air molecules in a room, resulting in an electrically-charged air.

As the negative ions attach themselves into particles, including dust mites, they are attracted to surfaces that hold the opposite charge. These dust mites, which are sometimes lumped together due to the charge, can be filtered off in an air purifier or find themselves sticking on to curtains, carpets, floors, and other parts of your home.

Air ionizers were initially billed as a technology that could remove particulate matters from the air, and reduces allergies.  However, the are studies suggesting that ionizers are not effective in removing allergens from the air.

The idea is that the negatively charged ions will remove allergens from the air. While this is true to an extent, it only makes the allergens concentrate on the floor or other areas the negative charges are attached to. It doesn’t take much to start sending the allergens back into the air again.

While it may be true that ionizers do little in managing allergies, is it effective in killing dust mites? Dust mites can grow exponentially given in most households where the environment is optimal for their growth.

A study conducted by the Infectious Diseases Research Centre, Malaysia has concluded that ionizers may increase the mortality rate of dust mites. However, the study only focuses on commercial ionizers, particularly one produced by Medklinn.

The commercial ionizer produces up to 3 million negative ions per second which kill dust mites that are directly exposed in the air. The researchers also tested the ionizer on a mattress. However, mites that are hidden in the mattress are not affected by the negative ions.

It’s safe to assume that other brands of ionizers may lead to the demise of dust mites, particularly those that are floating in the air. The question is, how efficient they are compared to the one used in the study.

Ionizers do kill and reduce the population of dust mites in your home, but does it reduce allergy symptoms?

First of all, it’s important to realize that dust mites itself don’t trigger allergies. It was a type of protein in their fecal pellets that are causing the symptoms. The ionizer may have killed the mites, but it does nothing to neutralize the protein.

Dust mites fecal pellets are a fraction of the mite’s size, and they could easily send floating in the air. Exposure to the fecal pellet is bound to trigger the allergies.

Of course, there’s also the argument that with a number of the mites destroyed, lesser allergen will be produced. So far, there are no studies that have been conducted to evaluate the relation of ionizers and allergies caused specifically by dust mites allergen.

Are There Side Effects In Using Ionizers

An ionizer uses high-voltage to create negatively-charge ions. During this process, a type of gas, ozone was produced. Ozone is a molecular combination of 3 oxygen atoms. It is naturally existing in the earth’s stratosphere, which helps to block harmful UV rays from reaching the surface.

However, the same gas can be harmful to humans, when inhaled. According to EPA, breathing in ozone may cause coughing, chest pain, lung irritation, and in certain cases, lung damages. When the first ionizer was introduced to the market, many customers are oblivious to the danger of ozone.

Various standards are available to regulate ozone exposure to users. The FDA requires that ozone emission from medical devices to be no higher than 0.05 ppm. In California, ionizers are required to be certified by the California Air Resources Board (CARB).

Are There Better Ways To Kill Dust Mites?

There’s no stopping you to buy an air ionizer if you find it beneficial. However, there are various ways to kill dust mites, with some proven to be more effective.

Heat has so far been my preferred method in killing dust mites. If you have a steam cleaner, the hot vapor will kill dust mites in carpets almost instantly. A UV vacuum cleaner, usually equipped with hot air treatment, is also a handy device in destroying dust mites in the mattress.

You may also want to try spraying essential oils dilution, particularly clove and eucalyptus. They are the few types of essential oils that have been scientifically proven to be effective in killing dust mites.

Ionizers cloud wipe off some of the dust mites in your home. However, studies have shown that it probably isn’t worth getting one just for the sake of killing dust mites. 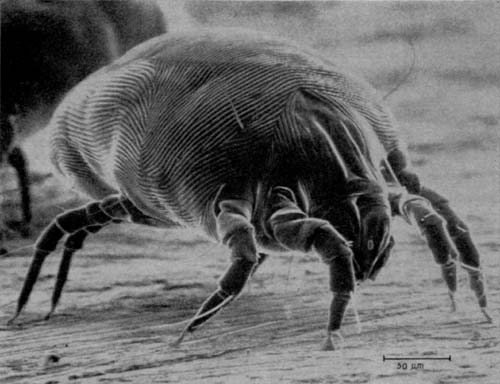