Stopping dust mite allergies is painfully hard. It can also be an expensive affair as you’ve read how getting tools like HEPA vacuum, steam cleaner, or UV sanitizer help to kill the mites. While some of these tools or methods may destroy the mites, some people show no reduction in the allergies.

The truth is, merely killing dust mites may not be enough to stop the allergies. It may seem mysterious why solutions like freezing stuffed toys have little to show in terms of allergy reduction.

You need to be aware that it wasn’t the mites that are directly triggering an allergic response in the human body. Instead, it was the proteins that are commonly found in the mites’ excretion, which causes allergy symptoms.

Some of the common allergy-inducing proteins in dust mite excretions are Der f 1 and Der p 1. When humans inhale dust mite allergens, these proteins come into contact with the respiratory system and thus trigger the allergies.

Another fact that you need to know is that dust mite allergen or the fecal pellet measures around 20 microns. It is more than 10 times smaller than a dust mite, which is around 300 micron. If you’re dust mite cover with a pore size between 20 to 300 micron, you’ll still come into contact with the allergen in the mattress or pillow.

Do These Solutions Kill Dust Mites And Denature The Allergen? 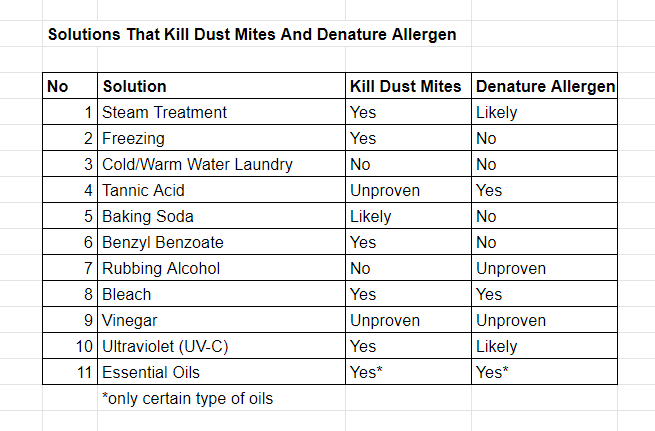 Your bid in stopping dust mites allergies will be more effective when understanding if the action or tool that you’re using is effective in killing the mites and denaturing the allergen. I’ve dug into scientific studies for each item listed below.

Yet, another clinical trial has shown that steam treatment has been very effective in reducing dust mite allergen in carpets. The result is also backed up by a separate study where 100% mortality of mites and denaturing of the allergen were observed.

Do the conflicting results mean you should stop steam cleaning the carpet? No.

Instead, you’ll want to combine steam cleaning with vacuuming with a HEPA vacuum. A study published in 2008 has shown that combining both methods remove 85.5% of dust mite allergen in carpets.

If denaturing the allergen in the carpet is difficult, you’ll just have to remove them safely.

You may have heard how freezing soft toys and other infested items will kill dust mites. While it’s true that dust mites can’t survive at low temperatures, freezing is unlikely to denature the allergen. According to this study, you’ll still need to wash the items to remove the allergen after freezing.

When you wash clothing or bedding with cold or warm water, neither the dust mites will be killed nor the allergen denatured. However, there’s a chance that most of the mites and allergen will be removed.

How do you get a 100% kill rate? Well, wash in high temperature above 100% or use special detergents that kill dust mites and denature the allergens.

Tannic acid, which is used in medications, food, and wood-staining. A detailed study has found tannic acid, introduced in 1% and 3% solutions, has been effective in denaturing dust mite allergen. However, no studies have suggested that tannic acid is effective in killing live mites.

You’ll want to be careful when using tannic acid. Researchers have cautioned that it deteriorates into microparticles, which may cause respiratory or skin problems.

Baking soda is a popular household item that’s often used in baking and cleaning. While there isn’t any study in its efficacy in killing dust mites, it is believed that baking soda absorbs moisture when coming into contact with live mites, thus killing the pests.

However, a study has been done on the effect of baking soda and the level of dust mite allergen. The result has been disappointing as there isn’t any reduction after baking soda is applied.

Commonly used in repellant and medicine, benzyl benzoate has been proven to be very effective in killing dust mite. According to a published study, all of the 50 live mites cultured are killed with a 0.8% solution of benzyl benzoate.

However, benzyl benzoate is not effective in denaturing the mites allergen, based on the same study for the baking soda.

Bleach has been a useful cleaning agent, particularly for stubborn stains. Researchers found that exposing dust mites to 10% of bleach solution effectively kill every single of them.

There’s also a strong suggestion from previous studies that link bleach to denaturing dust mite allergen. However, bleach isn’t recommended as a long term solution for dust mites, as over-exposure may link to complications like bronchitis and asthma.

Vinegar is a popular household solution for cleaning, but does it kill dust mites? So far, no studies have been conducted to verify the popular myth of using vinegar to kill dust mites.

As for denaturing the allergen, the is a theory that the acidity of vinegar may neutralize the protein in the fecal pellets. Still, there isn’t any concrete evidence to back up the theory.

UV-C may also alter the protein in the fecal pellets, which means there’s a chance that UV-C may denature the allergen.

Some essential oils, particularly clove, osemary, and eucalyptus are proven to be very effective in killing dust mites. This due to certain compounds like p-cymene and thymol, which are found to be in higher concentration in these essential oils.

I hope you’ll find the answer to why the allergies linger even when you’re sure you’ve killed thousands of mites. Often, a combination of a few methods is needed to effectively kill the mites and reduce the allergy symptoms.